Happy Saturday to you! This mid-afternoon coffee date comes to you from rainy Knoxville at the end of an insane week! Today, I’m drinking again from my French press (pictured above) and I added a little Frosted Sugar Cookie creamer. Novella and I were going to venture to Sam’s and Target today, but it’s rainy and cold and we are recovering from being sick, so I opted to use Instacart grocery delivery. In a little while, we are going to whip up some chili, homemade macaroni and cheese, and brownies. I’m quite excited for this because we’re going to wear our matching aprons my mom made us!

B is out of town in Clarksville today for the second time this week which leads me to my first topic: we are selling our Clarksville home. It’s just time. We held onto it for a multitude of reasons, but we always said we would know when it’s the right time to let it go and that time is definitely now. I am hoping to make some changes to our life in the near future, and one of my stipulations is that we get that house sold. Just as I was starting to doubt myself and plans, our tenants messaged and asked if they could get out of their lease a little early. It felt like divine intervention (although I actually believe every little thing is just that). So, he’s there today making a list of all the necessary repairs, including the roof. Eeek.

I’d be lying if I said I’m not a little nervous about the whole process. I’ve never sold a house before, and we haven’t lived in this house for over four years. I have little to no emotional attachment to it, but I know it’s going to be expensive on the front end, and we’ve already sunk quite a bit of money into our current home.

Butttttt…our renovations are almost done. There of course are some cosmetic things that need to be done. I swear when it’s all done, I will outline the whole process. But, let me say this: if there were no drama in this reno stuff, HGTV shows would be like 5 minutes long. Tops.I’d say the biggest hiccup for us is that it has taken so.much.longer than I thought it would. To be fair to us, dude said it would be a week. Well, we are embarking on our second weekend without anything to sit on but our beds (and kitchen table) and although I’m an extremely patient person, I’ve lost it a few times.

Mostly because we all got really sick this week. I guess it was a virus. I hate that word because there’s nothing you can do about it. I went down first. Then B. Then Novella at 1 am. It was especially disastrous because what could we really do to relax? We had workers in our home (and they were working in our room that day) and nowhere to lay our heads. I had to stay at my sister’s house for two days! I’m so thankful to have family here. Otherwise, we would’ve had to stay in a hotel during the day, and I would hate to fork over that money because, ya know, opportunity costs! That’s two new faucets! 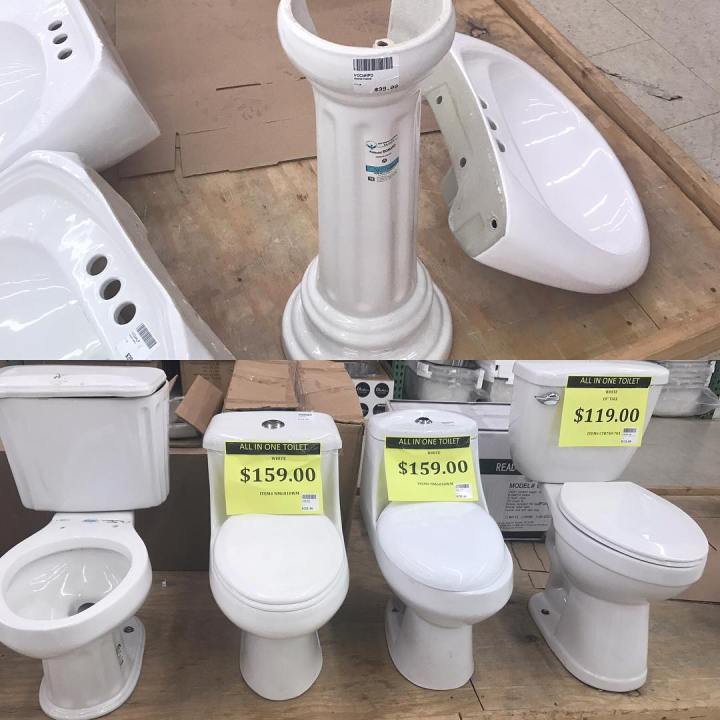 Since people have been in the house and I want to keep her away from the actual construction site that is our home, I’ve been taking Novella out in the afternoons either walking or shopping, or sometimes both. Well, the other day we went to a salvage place and I was in awe of some of the prices, so I started snapping some pictures. As I took a picture of the sink, I turned around to find my little darling bare-bottomed and attempting to use one of these potties.

This really has been such an adventurous week! I am not a big change-monger, yet here I am! For me, starting is the difficult part. I’ve learned a lot about myself and our little family over this last week. Maybe it’s something I’ve always known, but we are so much better when we’re working together- when we have clear visions and goals, but must adapt and change along the way. I named this blog “C is for curveball” because it’s the one thing I know to be sure about this life- it will always throw you curveballs.

I hope everyone has a safe and happy Halloween weekend!